Another important new feature in SQL Server 2005 that is enabled by the integration of the .NET CLR is the ability...

to create true user-defined types (UDTs). Using UDTs, you can extend the raw types provided by SQL Server and add data types that are specialized to your application or environment.

In the following example you'll see how to create a UDT that represents a gender code: either M for male or F for female. While you could store this data in a standard one-byte character field, using a UDT ensures that the field will accept only these two values with no additional need for triggers, constraints, or other data validation techniques.

To create a UDT using Visual Studio 2005, select the New | Project option, give your project a name, and click OK to create the project. For this project I used the name of Gender for the new UDT. After naming the project and clicking OK, I filled out the New Database Reference dialog using the required connection values to deploy the project to the appropriate SQL Server system and database. Next, I used the Project | Add User-Defined Type option to display the Add New Item dialog that you can see in Figure 3-11. 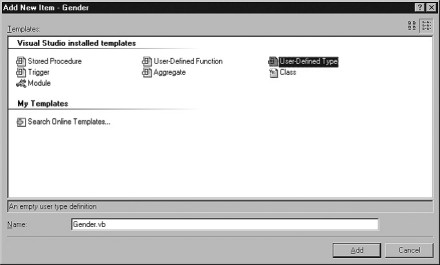 Select User-Defined Type from the list of SQL Server templates. Enter the name that you want to assign to the class and then click Open to have Visual Studio generate a starter project file for the UDT. The starter project file implements the four methods that SQL Server 2005 requires for all UDTs. These methods are needed to fulfill the SQL Server UDT contract requirements—it's up to you to add the code to make the UDT perform meaningful actions. The four required UDT methods are listed in Table 3-1. You can see the completed Gender class that is used to implement a UDT for M (male) and F (female) codes in this listing:

To create a UDT, the code must adhere to certain conventions. The class's attributes must be serializable, the class must implement the INullable interface, and the class name must be set to the name of the UDT. You can optionally add the IComparable interface. In this example, Gender is the class name. Near the bottom of the listing you can see where a private string variable named m_value is declared to hold the value of the data type.

Like the other CLR database objects, the Attribute plays an important part in the construction of the CLR UDT. The SQL Server UDT Attribute accepts the property values shown in Table 3-2. 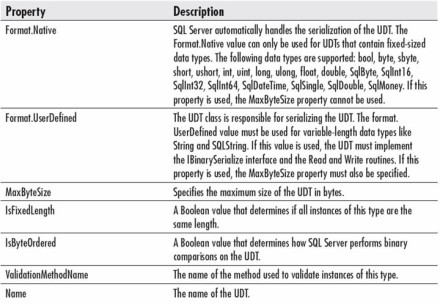 The next section of code defines the IsNull property. This property's get method checks the contents of the m_value variable and returns the value of true if m_value is null. Otherwise, the get method returns the value of false. Next, you can see the Null method, which was generated by the template to fulfill the UDT's requirement for nullability.

The Value property is specific to this implementation. In this example, the Value property is used to store and retrieve the value of the UDT. It's also responsible for editing the allowable values. In the set method, you can see that only the values of M or F are permitted. Attempting to use any other values causes an exception to be thrown that informs the caller that the "Gender data type must be M or F".

Very much like a CLR stored procedure or function, the UDT is compiled into a DLL after the code is completed. That DLL is then imported as a SQL Server assembly using the CREATE ASSEMBLY and CREATE TYPE statements or by simply using the Visual Studio 2005 Deploy option. You can see the T-SQL code to manually create the CLR UDT in the following listing:

This listing assumes that gender.dll has been copied into the c:temp that's on the SQL Server system. One thing to notice in the CREATE TYPE statement is the class parameter. As in the earlier CLR examples, the first part of the External Name clause specifies the assembly that will be used. In the case of a UDT, the second part of the name identifies the namespace and class. In the Gender example, the Namespace was Gender and the UDT's class was also named Gender.

Once the UDT is created, you can use it in T-SQL much like SQL Server's native data types. However, since UDTs contain methods and properties, there are differences. The following example shows how the Gender UDT can be used as a variable and how its Value property can be accessed:

In this listing the UDT variable is declared using the standard T-SQL DECLARE statement, and the SET statement is used to attempt to assign the value of N to the UDT's Value property. Because N isn't a valid value, the following error is generated:

Just as UDTs can be used as variables, they can also be used to create columns. The following listing illustrates creating a table that uses the Gender UDT:

While creating columns with the UDT type is the same as when using a native data type, assigning values to the UDT is a bit different than the standard column assignment. Complex UDTs can contain multiple values. In that case you need to assign the values to the UDT's members. You can access the UDT's members by prefixing them with the (.) symbol. In this case, since the UDT uses a simple value, you can assign values to it exactly as you can any of the built-in data types. This example shows how to insert a row into the example MyContacts table that contains the Gender UDT:

To retrieve the contents of the UDT using the SELECT statement, you need to use the UDT.Member notation as shown here when referencing a UDT column:

To see the UDTs that have been created for a database, you can query the sys.Types view as shown here: