No discussion of the new CLR features would be complete without a description of the security issues associated with using .NET assemblies and the SQL Server CLR. Unlike T-SQL, which doesn't have any native facilities for referencing resources outside the database, .NET assemblies are fully capable of accessing both system and network resources. Therefore, securing them is an important aspect of their development. With SQL Server 2005, Microsoft has integrated the user-based SQL Server security model with the permissions-based CLR security model.

Following the SQL Server security model, users are able to access only database objects—including those created from .NET assemblies—to which they have user rights. The CLR security model extends this by providing control over the types of system resources that can be accessed by .NET code running on the server. CLR security permissions are specified at the time the assembly is created by using the WITH PERMISSION_SET clause of the CREATE ASSEMBLY statement. Table 3-4 summarizes the options for CLR database security permissions that can be applied to SQL Server database objects.

In addition to using the CREATE ASSEMBLY statement, you can also set the CLR database object permission using the project properties as is shown in Figure 3-16. 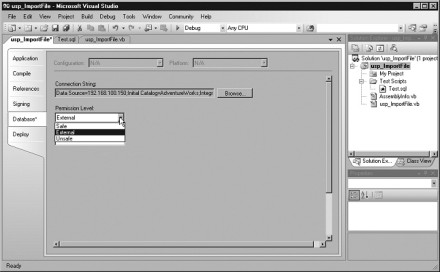 To interactively set the CLR permission level, open the project properties by selecting the Project | Properties option from the Visual Studio 2005 menu. Then open the Database tab and click the Permission Level drop-down. The project must be redeployed before the changes will take place.

As shown in Table 3-5, SQL Server 2005 provides system views that enable you to see the different CLR objects that are being used in the database.