In addition to stored procedures and user-defined functions, the new .NET integration capabilities found in SQL Server 2005 also provide the ability to create CLR triggers. To create a trigger using Visual Studio 2005, you start your project as you saw in the earlier examples. To create a trigger using Visual Studio 2005, select the New | Project option, give your project a name, and click OK to create the project.

For this project, I used the name ti_ShowInserted for my trigger. This trigger essentially retrieves the values of the row being inserted in a table and displays them. After naming the project and clicking OK, I filled out the New Database Reference dialog using the same values that were shown in the previous examples. Next, I used the Project | Add Trigger menu option that you can see in Figure 3-10 to create a starter project for the CLR trigger. 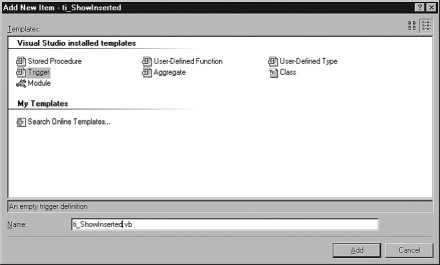 As you saw in the earlier example of CLR database objects, you select the Trigger option from the list of templates and then provide the name of the trigger in the name prompt. Visual Studio 2005 will generate a starter project file that you can add your code to. The starter project includes the appropriate import directives as well as generating a class, in this case appropriately named Triggers, and a method named ti_ShowInserted with its appropriate method attribute. The following code listing shows the completed code for the CLR trigger named ti_ShowInserted: 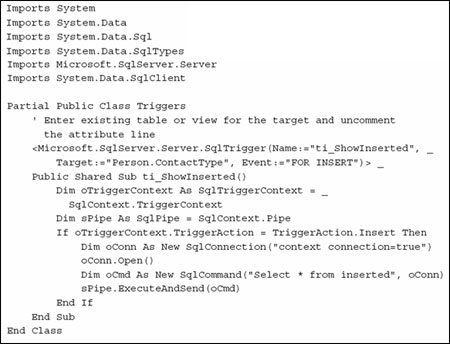 The example CLR trigger displays the contents of the data that is used for an insert action that's performed on the Person.ContactTypes table in the Adventureworks database. The first thing to notice in this code listing is the Attribute for the ti_ShowInserted subroutine (the code enclosed within the < > markers). The Attribute is used to name the trigger and identify the table the trigger will be applied to as well as the event that will cause the trigger to fire.

In this example, the resulting trigger will be named ti_ShowInserted. It will be applied to the table named Person.ContactType, which is in the AdventureWorks database, and the trigger will only be fired for an insert operation.

Next, a SqlPipe object is created. The SqlPipe object enables the trigger to communicate with the external caller, in this case to pass the inserted data values to the caller. The TriggerAction property of the SqlContext object is used to determine if the trigger action was an insert operation. Using the TriggerAction property is quite straightforward. It supports the following values:

If the TriggerAction property equals TriggerAction.Insert, then an insert was performed and the contents of the virtual trigger table are retrieved and sent to the caller using the SqlPipe object's Execute method. In order to retrieve the contents of the virtual table, a SqlConnection object and a SqlCommand object are needed. These objects come from the System.Data.SqlClient namespace. You should note that when used with server-side programming, the Connection String used by the SqlConnection object must be set to the value of "context Connection=true". Then a SqlCommand object named oCmd is instantiated that uses the statement "Select * from inserted" to retrieve all of the rows and columns from the virtual table that contains the inserted values. Finally, the ExecuteAndSend method of SqlPipe object is used to execute the command and send the results back to the caller.

Once the code has been created, you can either deploy it to the database using the Visual Studio 2005 Build | Deploy solution option or manually drop and re-create the assembly and any dependent objects you saw in UDF examples earlier in this chapter. ch03.

After the CLR trigger has been deployed, it will be fired for every insert operation that's performed on the base table. For example, the following INSERT statement will add a row to the Person.ContactType table, which will cause the CLR trigger to fire: