Stored procedures are one of the most common database objects that you'll want to create using one of the managed...

To create a CLR stored procedure in Visual Studio 2005, first select the New | Project option and then select the SQL Server Project template as is shown in Figure 3-3. 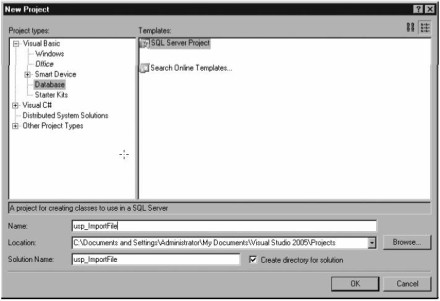 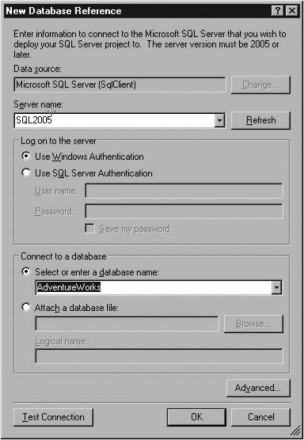 Visual Studio 2005 uses the New Database Reference dialog to create a connection to your SQL Server 2005 system. That connection will be used to both debug and deploy the finished project. Drop down the Server Name box and select the name of the SQL Server that you want to use with this project. Then select the type of authentication that you want to use and the database where the CLR stored procedure will be deployed. In Figure 3-4 you can see that I've selected the SQL Server system named SQL2005. The project will connect using Windows authentication, and the stored procedure will be deployed to the AdventureWorks database. You can verify the connection properties by clicking the Test Connection button. Once the connection properties are set up the way you want, click OK. All of the required references will automatically be added to your SQL Server project, and Visual Studio 2005 will generate a SQL Server starter project.

Next, to create the CLR stored procedure, you can select the Project | Add Stored Procedure option to display the Visual Studio installed templates dialog that's shown in Figure 3-5. 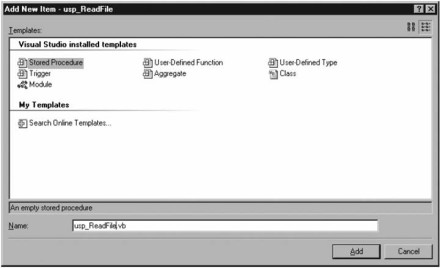 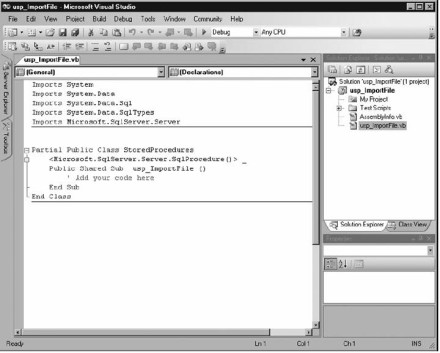 It's up to you to fill in the rest of the code that makes the stored procedure work. The following example illustrates the source code required to create a simple CLR stored procedure that imports the contents of a file into a varchar or text column:

The first important point to note in this code is the directive that imports the Microsoft.SqlServer.Server namespace. This enables the usp_ImportFile project to use the SQL Server .NET Data Provider without always needing to reference the fully qualified name. The second thing to notice is the

If any errors occur while the input file is being read, then the code in the Catch portion of the Try-Catch structure is executed. Within the Catch block a SqlPipe object named sp is created and then used to send those errors back to the caller of the stored procedure. This code block uses the SqlPipe object, which represents a conduit that passes information between the CLR and the calling code. Here, the SqlPipe object enables the stored procedure to pass error information to the external caller.

At this point the code is finished for the stored procedure, but because of security concerns, it still can't execute. By default SQL Server CLR objects can only access database resources, and they cannot access external resources. In the case of the usp_ImportFile example, the stored procedure needs to access the file system, so the default security settings need to be changed. To enable external access, you need to open the project's properties and click the Database tab. Then in the Permissions Level drop-down you need to change the value from Safe to External. More information about the CLR security options is presented later in this chapter.

You can perform the deployment manually as was shown in the earlier section "Creating CLR Database Objects". To do this, you essentially need to move the compiled DLL to a directory or file share where it can be accessed by SQL Server. Then run the CREATE ASSEMBLY statement to register the DLL and copy it into the database.

The CREATE PROCEDURE statement is used to create a new SQL Server stored procedure that uses the CLR assembly. This CLR stored procedure uses two parameters. The first is an input parameter, and the second is an output parameter. The EXTERNAL NAME clause uses a three-part name to identify the target method in the DLL. The first part of the name refers to the assembly name. The second part refers to the class. If the class is part of a namespace, as is the case here, then the namespace must preface the class name and both should be enclosed in brackets. Finally, the third part of the name identifies the method that will be executed.