Let's examine each of these changes in more detail.

A snapshot is replication data, schema and metadata that can recreate the tables, stored procedures, functions, views and so on from the publisher to the subscriber.

This Microsoft blog post has information on the scalability improvements, but the most interesting part is in the following quote:

"The results are nothing short of eye-popping. A pull replication scenario, which used to run in 223 minutes using [SQL Server 2005] Yukon on Win2K3, takes just under 2 minutes on [Windows 2008 Server] Longhorn server with Katmai. And an 11.3GB snapshot was sent >2K miles in ~23 minutes, a rate of almost 500 MB/minute. That's BYTES, not bits. Talk about 'better together!' "

A new interface for creating and modifying peer-to-peer topologies

Figure 1 has an illustration of this new peer-to-peer topology interface, while Figure 2 demonstrates how to add a new node to this topology. 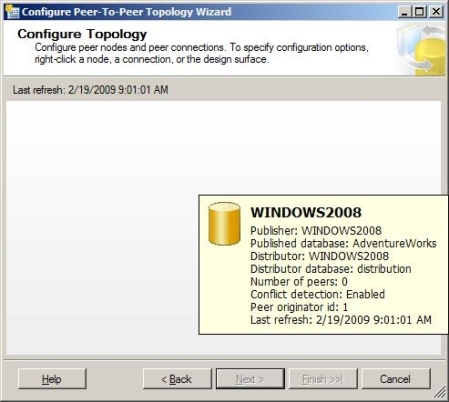 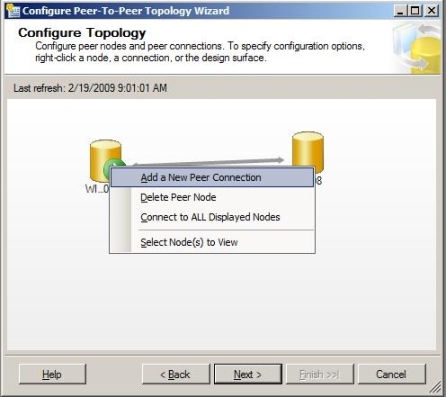 In SQL Server 2008, you can make changes at any time. You can add or remove nodes and make schema changes without keeping users from accessing the system. SQL Server 2008 also permits conflict detection, which is enabled by default. A conflict occurs when you attempt to update a row that has been deleted on another node, update the same row on different nodes or assign the same primary key value on different nodes simultaneously. In SQL Server 2005, this would cause the distribution agent to fail and you would have to manually fix the problem on the affected nodes. It can be very complex and laborious if there are large numbers of conflicts.

SQL Server 2008 allows you to disable conflict detection, which causes the distribution agents to skip conflicts. Microsoft recommends that you partition your data as much as possible to eliminate any chance of conflicts.

Previous versions of SQL Server forced DBAs to reinitialize subscriptions of databases if they were publisher of log shipping. In SQL Server 2008, it is possible to failover to a mirror database or secondary server and have replication continue to replicate to the subscriber. To take advantage of this, you need a remote distributor. You can find detailed instructions in this white paper on providing high availability using database mirroring.

Changes to the Replication Monitor

That covers the main changes to replication in SQL Server 2008, the most compelling of which are snapshot and transaction delivery improvements when running SQL Server on Windows 2008.

ABOUT THE AUTHOR
Hilary Cotter, SQL Server MVP, has been involved in IT for more than 20 years as a Web and database consultant. Microsoft first awarded Cotter the Microsoft SQL Server MVP award in 2001. Cotter received his bachelor of applied science degree in mechanical engineering from the University of Toronto and subsequently studied both economics at the University of Calgary and computer science at UC Berkeley. He is the author of a book on SQL Server transactional replication and is currently working on books on merge replication and Microsoft search technologies.