Learn how to license a standby server for SQL Server replication

SQL Server 2012 pricing and licensing will undergo a shift when the database releases in a virtual launch Wednesday, with the main changes being a reduction in the variety of editions and a move from processor- to core-based licensing.

The release will be available in three main editions: Enterprise, Business Intelligence and Standard. The Enterprise is the all-inclusive database platform, with Microsoft saying it is ideal for mission-critical applications, large data warehouses and highly virtualized environments. The Standard Edition is for “departmental databases” and “limited business intelligence projects,” according to a vendor presentation. And the new Business Intelligence edition strikes a balance between the two. It is the Standard Edition with some added BI capabilities such as data quality, master data management and advanced analytics. 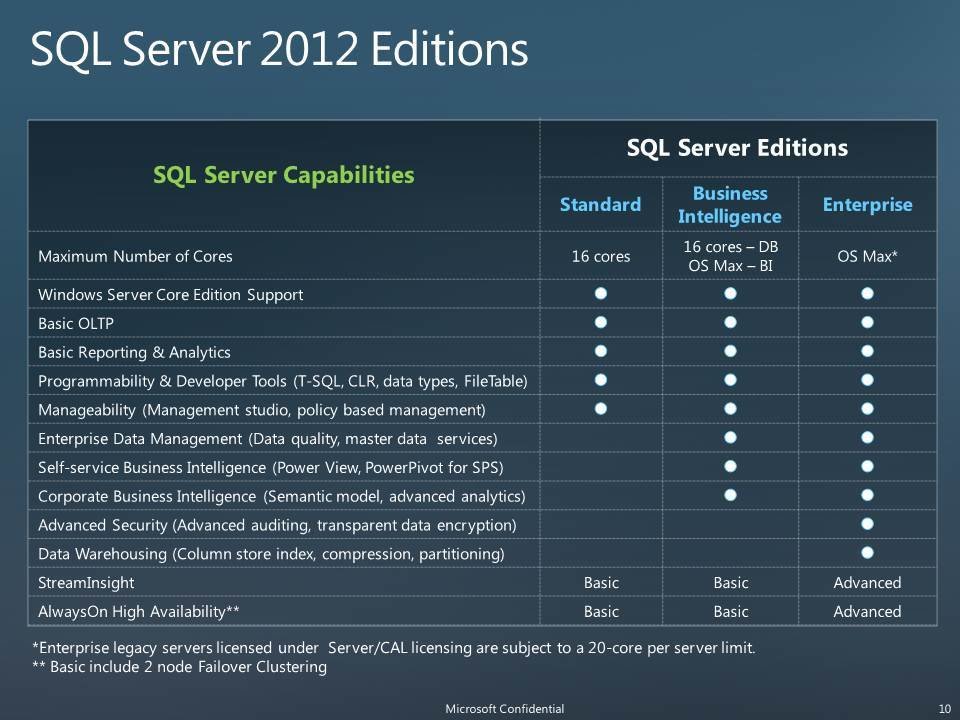 SQL Server 2012 licensing changes
With the different editions come options. One of the biggest changes with SQL Server 2012 pricing is that Microsoft is moving from processor-based to core-based licensing on Standard and Enterprise editions. It also will offer a server plus client access license (CAL) model on the Standard and Business Intelligence editions. The CAL license is increasing about 25% to $207 per CAL. The Standard Edition pricing per server remains the same.

Under core-based licensing, you will have to license all the processing cores in a server, with a minimum of four licenses required for each physical processor in the server. So you should be running at least quad-core processor servers for SQL Server 2012; otherwise, you’ll be paying for core licenses that you aren’t using.

So as chipmakers continue to increase the number of cores in their processors, the cost of doing business on SQL Server 2012 will also rise if you have per-core licensing. 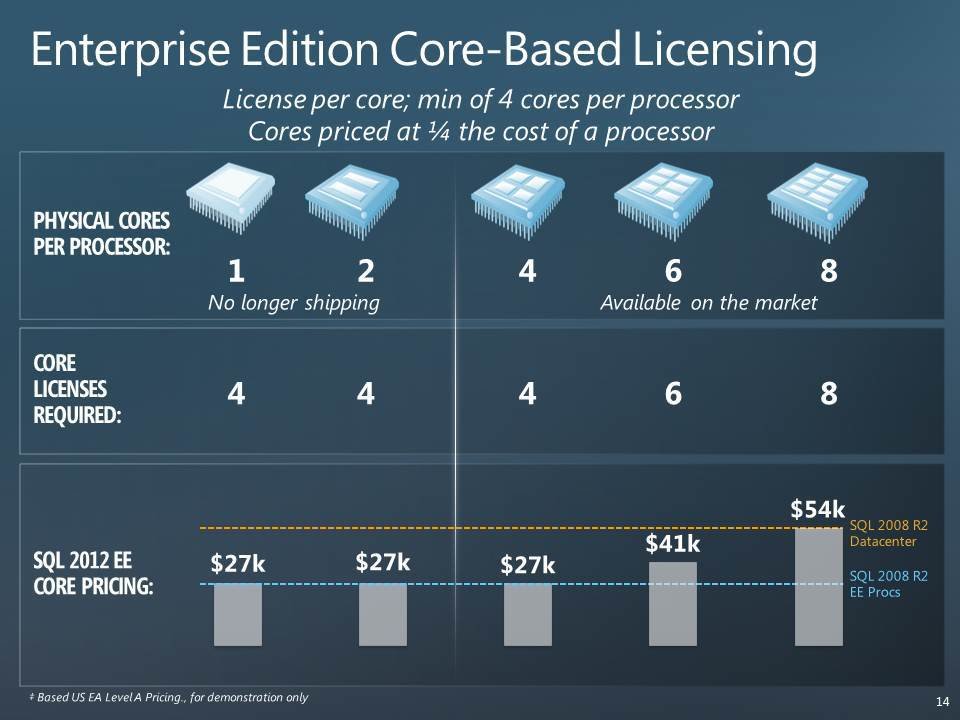 SQL Server 2012 pricing with virtualization
To license a virtual machine (VM) with core-based licenses, you can just pay for the virtual cores within the VM. But there is a minimum of four core licenses per VM. Each licensed VM covered under Microsoft’s Software Assurance program can be moved around on your physical server or to a private or public cloud.

If you have SQL Server 2012 Enterprise Edition with Software Assurance, you can deploy an unlimited amount of VMs on each server without having to pay more. 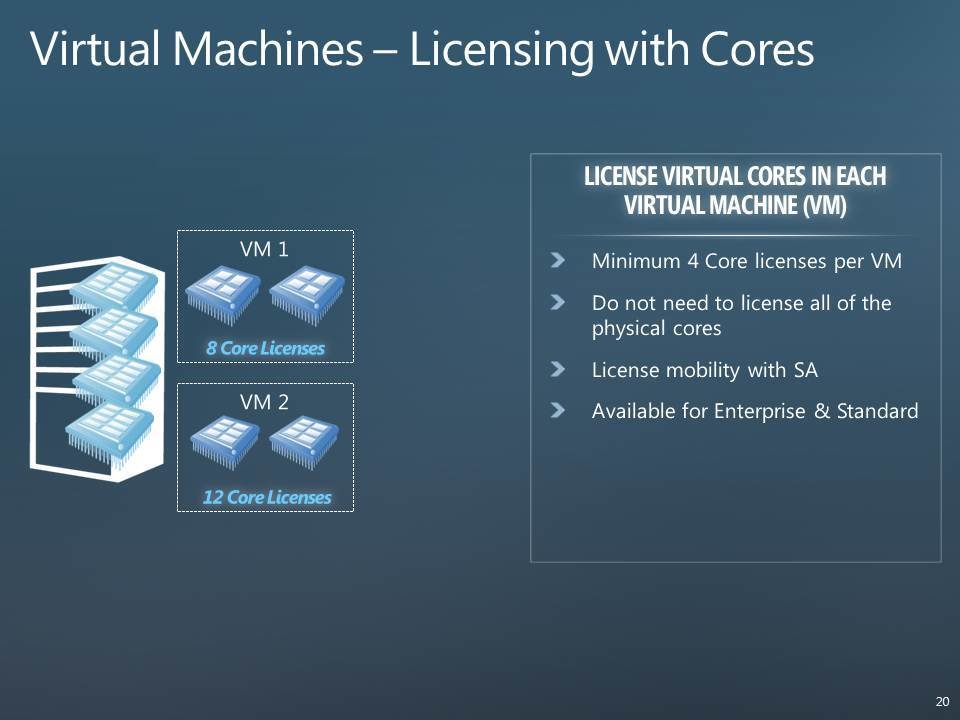 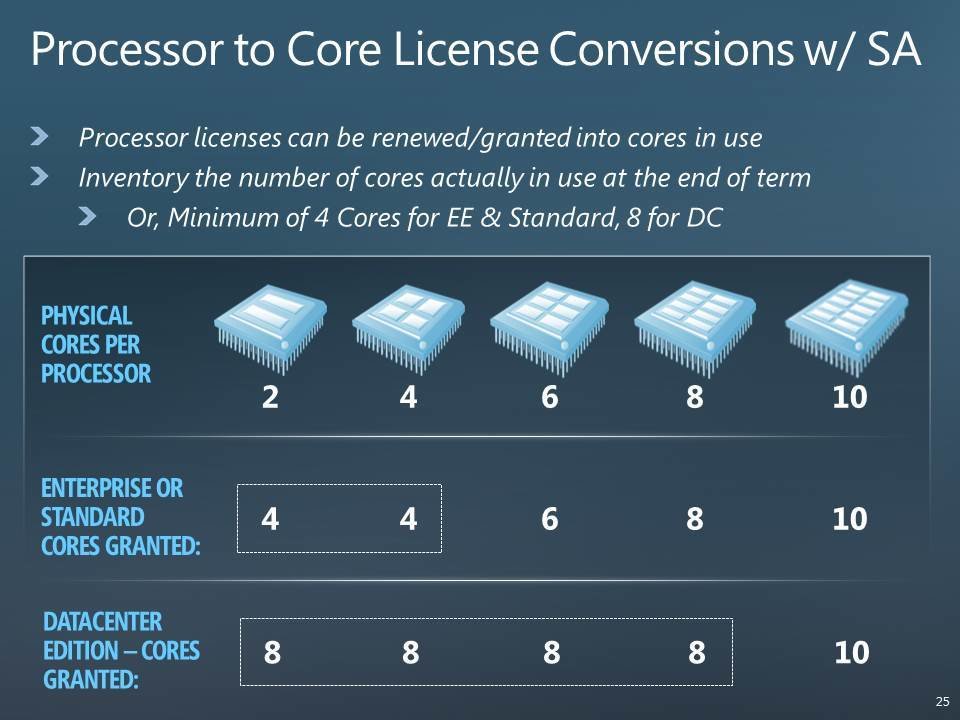