This content is part of the Essential Guide: Guide to SQL Server virtualization best practices

Since the release of Hyper-V, Microsoft has continued its commitment to server virtualization by releasing new software products that are optimized for just that. This is the case for SQL Server 2008 among other Microsoft products.

When previously discussing fault-tolerant virtual installations, the Microsoft SQL Server support team has published specific strategies for virtualizing SQL Server installations. These strategies include different guidelines for SQL Server virtualization, but the most interesting being those used to achieve fault tolerance.

It basically works like this. Since each host server in a server virtualization resource pool will run several virtual machines at once, most organizations will create fault-tolerant host server configurations to protect these VMs. Then once the hosts are made redundant through a host cluster, each and every one of the virtual machines running on these hosts will become a protected application and thus gain a certain level of fault tolerance. In the event of a host failure, the VMs running on this host will also fail, but will automatically be restarted on another host in the cluster.

This is one strategy that can be used to create SQL Server virtual machines and ensure high availability. The process is simple:

You will then have a fault-tolerant SQL Server virtual machine. When and if the host node running the SQL Server VM fails, the VM will automatically be restarted on another node of the cluster. While this does not make SQL Server aware of the failover, it does ensure that the virtual machine is always running (see Figure 1). 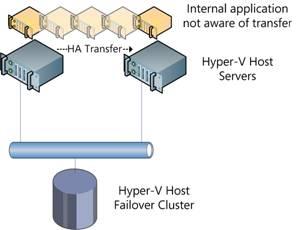 Danielle Ruest and Nelson Ruest are technology futurists focused on datacenter optimization and continuous service availability. They are authors of multiple books, notably "Training Kit 70-652: Configuring Windows Server Virtualization with Hyper-V" published by Microsoft Press and "Virtualization, A Beginner's Guide" published by McGraw-Hill Osborne. For more tips, write to them at [email protected].