SQL Azure Data Sync lets you synchronize SQL Server and SQL Azure databases across dispersed geographic locations. Built on the Microsoft Sync Framework, it’s easy to set up and maintain. You perform all management tasks through the Windows Azure Management portal, where you’ll find a simple point-and-click interface that lets you quickly configure synchronization jobs and monitor the process. 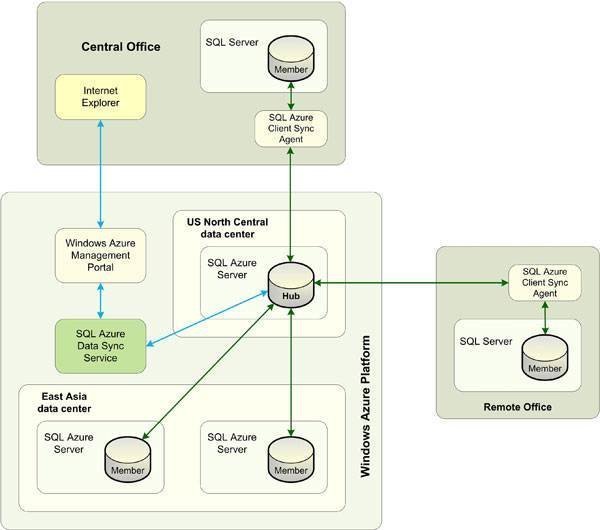 Access the SQL Azure Data Sync service through the Windows Azure Management Portal in your browser. This is where you set up synchronization jobs, but it’s also the hub database at the heart of the data sync topology. Because the hub is a SQL Azure database, it must reside on a SQL Azure server. That server can be in any Windows Azure data center. In this case, I’ve used the SQL Azure North Central U.S. data center as an example.

You can install the client application as part of the synchronization setup process or before implementing SQL Azure Data Sync. This is the only installation step you need to take; because SQL Azure Data Sync is part of Windows Azure, all other necessary steps are taken care of. Simply log on to the Windows Azure Management Portal and configure your jobs.

When you add a member to a sync group, specify the direction of your synchronization. You have three options:

Another option you must configure when setting up synchronization is the sync schedule, which lets you specify when you want your databases to be synchronized. You must also select a conflict resolution option that determines the resolution policy to apply when conflicts occur, which happens when the same data is changed in multiple databases between synchronizations. There are two options for how conflicts should be handled:

When setting up a sync job, you must also configure the sync data set, which defines the data that will be synchronized. You can choose which tables to include and which columns in those tables. You can also create filters that limit the rows of data to be synced. Once you’ve set up the data set, you’re ready to deploy your changes.

Deploying your sync job is an automated process that only requires you to click the Deploy button. The service will then provision each database to prepare for the synchronization process.

One of your biggest decisions when setting up a SQL Azure Data Sync job is determining which data center should host your hub database. Pick one that minimizes data latency during the synchronization process. For example, if most of your on-premises databases are in Europe, that's where you should put your hub.

The rest of the setup process is straightforward: Choose your configuration options and provision the databases. It’s that simple.

About the author:
Robert Sheldon is a technical consultant and the author of numerous books, articles and training materials related to Microsoft Windows, various relational database management systems, and business intelligence design and implementation. Check out his blog, Slipstream.

SQL Server Denali vs. the Azure cloud: Which one got more attention at Tech Ed?