The Microsoft Distributed Transaction Coordinator, or MSDTC, is an important part of the Windows operating system...

in Microsoft SQL Server. It lets a transaction on one server access objects on multiple servers. This can be done using the BEGIN DISTRIBUTED TRANSACTION statement. By using .NET code, a single transaction can be run across multiple SQL Server instances or multiple databases from various vendors. No matter how the transaction is started, it can be committed or rolled back on all servers at one time.

The Distributed Transaction Coordinator is a feature of the operating system used by the database engine to ensure multiserver transactional consistency. It is installed by default and configured for local access only. MSDTC must be configured for remote access so that instances on two separate servers can contact each other. For how to configure MSDTC, check out two separate articles on my blog, one for Windows 2003 and one for Windows 2008. If you are using MSDTC to connect two instances on the same server, remote configuration isn’t needed. When installing MSDTC in a clustered environment, it will be clustered automatically and only a single MSDTC instance will be used.

Troubleshooting MSDTC issues through SQL Server can be rather tricky; there is no real surface area to work with and you can’t issue commands directly against MSDTC as you can against a SQL Server instance. Microsoft provides two diagnostic tools that can be downloaded and used to ensure that two MSDTC instances can talk to each other successfully. The first, more basic tool is called DTCPing. The second tool is called WinRM or “Windows Remote Management.” When troubleshooting MSDTC issues, start with the DTCPing tool. Once that begins working, begin testing with WinRM.

For more on the Distributed Transaction Coordinator and SQL Server 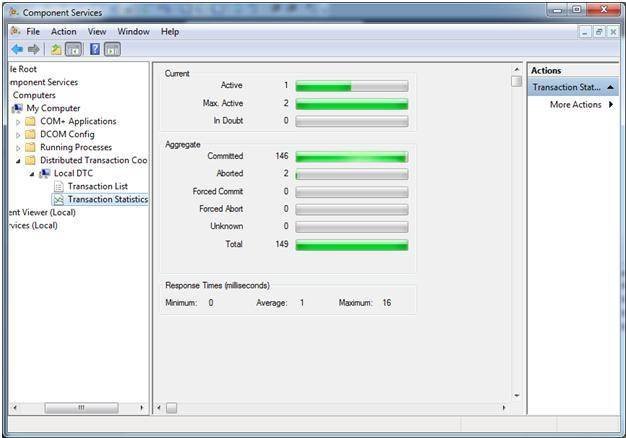 If more information is needed than the overall statistics in the bar graphs shown in Figure 1, then select the Transaction List from the left side of the menu. It lists all currently running transactions that MSDTC is processing, shown in Figure 2. 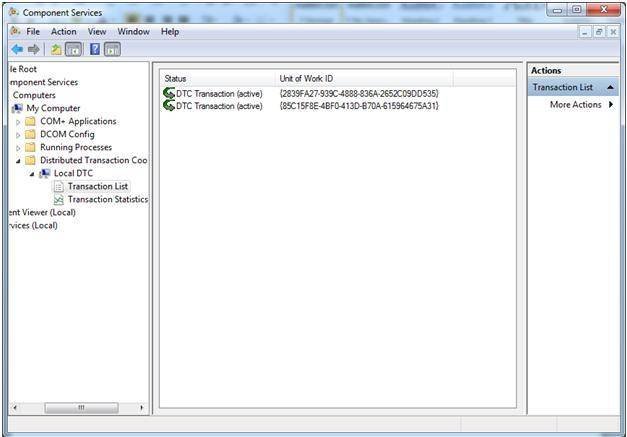 When configuring MSDTC it’s important to know how MSDTC services will communicate between computers, especially when there is a network firewall.  MSDTC uses Remote Procedure Calls, or RPC, to communicate between machines. RPC generally uses all network ports over 1024 to communicate. You can, however, limit the number of ports that RPC uses to communicate through the firewall. Do this by configuring RPC to allow 20 ports through the firewall. The number of ports will need to be increased if there are many simultaneous MSDTC transactions, or if features such as the cluster service or network file shares will use the RPC protocol, as all RPC traffic must be processed through this limited number of ports. It is not recommended to limit the TCP ports over which RPC can travel unless there is a need to, say, pass RPC traffic through a network firewall.

Not every database server needs to have  MSDTC configured for network access. When it is needed, however, you shouldn’t have to configure many machines just so that two can talk to each other. Instead, MSDTC should be properly configured on all servers so that those machines can communicate efficiently.