Rebels with (and without) a cause 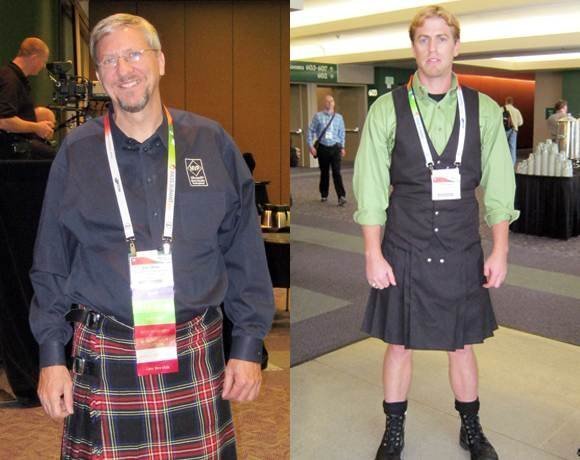 LEFT: Allen White, a practice manager at consultancy UpSearch in Brunswick, Ohio, led educational sessions on task automation framework PowerShell and message queue system Service Broker at PASS Summit 2011, the annual conference hosted by Professional Association for SQL Server. He was one of many guys who put on Scottish dress on SQL Kilt Day in honor of the Women in Technology (WIT) group, which spreads awareness about issues women in science and technology face. White, who has a daughter looking for a job in special education, said he was disappointed in the low numbers of women in the fields, attributing the trend to “a perception that technology is for gaming and gaming is for geek boys.” He said he has tried to get his daughter interested in technology so that she isn’t limited. “We need to get girls to understand that it’s a great career opportunity.”

RIGHT: John Sirmon, program manager at Microsoft’s SQL Server Customer Advisory Team didn’t know that most of the men donning kilts at the Seattle conference were supporting WIT, getting into one just for the novelty of it. Sirmon, who sported Harley-Davidson boots and a pea-green SQL CAT shirt, said he owns a kilt with the official pattern of his Scottish ancestors but couldn’t wear it on SQL Kilt Day. Pointing to his jersey, he said, “My tartan doesn’t match the green.”