There wasn’t anything particularly unusual about the man on stage on the second day of October’s PASS Summit 2011.

Bill Graziano, the Professional Association for SQL Server's vice president for finance, welcomed the crowd, thanked PASS members and volunteers for the work they’d done and then turned the mike over to the keynote speaker, Microsoft executive Quentin Clark. Graziano, who will become president of PASS in January, was a perfectly normal host to the nearly 4,000 IT pros gathered for the Seattle conference.

Except, of course, he was wearing a kilt.

But there wasn’t anything particularly unusual about that either. Graziano asked others dressed like him to stand. About 40 men did, modeling their knee-length garments.

“Those are the people that last year interrupted my keynote to demand that I wear a kilt,” Graziano said. “I quickly buckled under and I keep my word, so here I am in my kilt.”

For more on the PASS Summit

SQL Kilt Day has become something of a tradition at the summit, which offers training and networking for people who work with Microsoft’s SQL Server database, with guys tossing off their pants to show support for Women in Technology (WIT), a PASS interest group. WIT recently expanded its mission from spreading awareness about issues that women in the science and technology fields face, such as lower average pay, to promoting science, technology, engineering and mathematics among girls and young women. 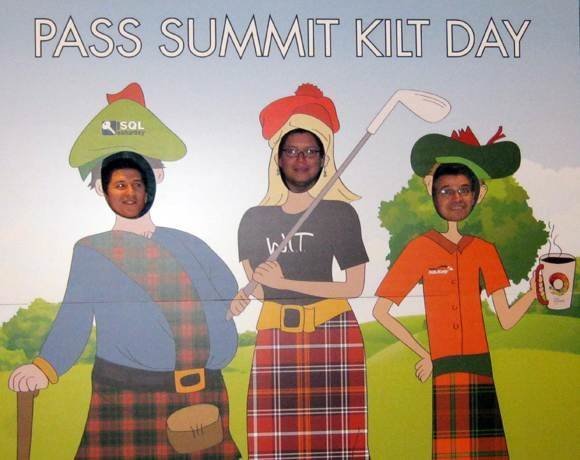 From the left, Juan Jose Puga, project manager at Chilean bank BCI, Ricardo Polo Saenz, software architect at credit card processor Nexus, and Juan Veliz Carmona, a database administrator at telecom Telefonica, all from Santiago, Chile, pop their heads into a SQL Kilt Day cutout board at October’s PASS Summit 2011 in Seattle. Follow this link for a slide show of the event.

A “virtual chapter,” the group meets monthly by conference call, but its keystone event is a panel luncheon that takes place during the PASS Summit. The numbers of kilt-wearers at the lunch started small, from barely a handful in 2009 to about two dozen this year.

“This year was really a stride forward,” said Wendy Pastrick, a database administrator (DBA) at Calamos Investments in Naperville, Ill., and WIT regional activity coordinator. The kilts, she said, are a symbol of support more declarative than the traditional ribbon worn in support of many causes. Indeed, around the Washington State Convention Center in downtown Seattle, men were spotted in kilts -- both utilitarian and traditional -- riding escalators, swapping business cards or attending sessions.

The kilts spurred a few chuckles at the conference, but the need for support, Pastrick said, was no joke. According to the Department of Commerce, women occupy nearly half the jobs in the U.S. workforce, yet they hold less than 25% of jobs in science, technology, engineering and mathematics. In computing and information sciences, the numbers are more dismal -- and slipping. A National Center for Women & Information Technology study found that in 2009, just 18% of undergraduate degrees were awarded to women; in 1985, women earned 37% of computing and information sciences degrees.

“It’s disturbing to me,” said Allen White, clad in a black, red and yellow tartan and white knee-high socks. A practice manager at consultancy UpSearch in Brunswick, Ohio, White said he wore a kilt to the conference because he has a daughter who’s struggled to find a job in a tough economy. The dearth of women in the science and tech fields is a result of “a perception that technology is for gaming and gaming is for geek boys,” he said. “We need to get girls to understand that it’s a great career opportunity.”

Pastrick said WIT doesn’t know how many women attend the PASS conference; up until this year PASS didn’t collect information on gender, and the group is still waiting on the official numbers. But a glance around at the summit shows that attendees are overwhelmingly men.

That’s why men’s involvement in WIT is so important, said Jes Borland, a tech consultant at Blue Door Consulting, in Oshkosh, Wis., and WIT’s director of social media. “A lot of people think WIT issues are only for men, that men can’t participate.” The kilts, she said, are a colorful way of showing they can. “They say, ‘Ask me why I am wearing a kilt.’”

The link between the traditional men’s dress of the Scottish Highlands and WIT is not so clear-cut as the answer.

It began in 2009 as a joke. But it had to do with the ventilation the garment offers, not its similarity to a woman’s skirt.

“I mentioned it was hot in the summer and somebody dared me,” said Grant Fritchey, a product manager in Grafton, Mass., for Red Gate Software and owner of several kilts. So just before the PASS Summit in November that year, he took to social media site Twitter. “In my capacity as nothing at all I declared day two SQL Kilt Day.”

The initial response wasn’t exactly a torrent, but it took hold. Three men -- Fritchey, Steve Jones, editor in chief of SQLServerCentral.com, and Bill Fellows, database developer and author of the World of Whatever blog -- bared their knees at the conference that year for no reason other than whimsy. As for Fritchey, he’s not even Scottish.

“I’m just a crazy person,” Fritchey said. “The first year it was pretty freaky -- three guys running around in kilts.”

And they were doing this, it happens, on the day of the WIT luncheon, which also falls on the conference’s second day. Buck Woody, a cloud computing specialist at Microsoft as well as a husband and father, made the connection and saw an opportunity to back something important.

“I want my daughter to know that anything is open to her,” Woody said.

So he pitched the idea of making it official: The guys in kilts would throw their support behind WIT at the luncheon. The group was thrilled, if not a touch surprised.

“So the Women in Technology group said, ‘Really? You’ll do this for us?’” Borland said.

Along with men in kilts came something somewhat unexpected: More males at the luncheon than WIT had seen in the eight previous years it had been hosting the event.

“That was the first year we had a lot more men come to the luncheon,” Pastrick said.

The trio created quite a buzz, and soon after the hash tag #sqlkilt appeared on Twitter, spreading the word about both the fashion and the cause. The next year at the conference, about 20 men were milling about in kilts, some wearing T-shirts that read, “I’m supporting Women in Tech. What are you doing? (Plus, I look hot in a skirt.)”

Shows of quirkiness are not rare at the cerebral PASS Summit. This year, alongside educational sessions with titles like “Performance tuning of spatial queries in SQL Server” and a lecture by a prominent academic on the future of data management was a lighthearted performance on the trials and tribulations of database management (“My query sucks -- it takes too long / So long I wrote this song”) and a couple, both DBAs, trading wedding vows at a video arcade.

But the kilt message struck a personal note with some attendees. Brian Allen, a DBA at health care training company HealthStream in Nashville, Tenn., wore a multicolored kilt and said his wife, a homemaker, is going back to school to study database administration.

Others just loved the novelty of exotic dress. Diego Nogare, a developer with consulting firm SolidQ in Sao Paulo, Brazil, bought his bright green kilt on eBay and had it sent to his hotel in Seattle. Word of mouth brought news of the phenomenon south last year.

“Last year I heard some things about SQL Kilt Day and I made a joke with my friends,” Nogare said. “‘I will wear a kilt. I will do it!’ ”

Regardless of the reasons for wearing them, Pastrick said the kilts get people talking -- hopefully to their daughters and granddaughters -- that women have a place to claim in technology.