During the installation process, you have to make many choices. As a general guideline, it is best to familiarize yourself with their effects before installing your system. At the beginning, you should answer the following questions:

The following subsections discuss these topics.

Which SQL Server components should be installed? 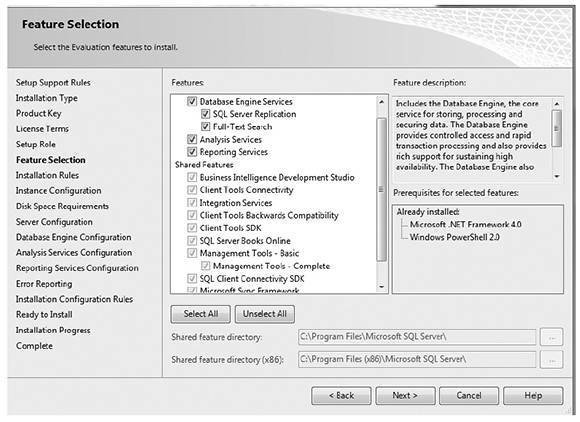 A preview of the feature selection page

Before you start the installation process, you should know exactly which SQL Server components you want to install. Figure 2-1 shows a partial list of all the components. You will see this Feature Selection page again when you install SQL Server later in this chapter, but knowing ahead of time which components you want to select means you don’t have to interrupt the installation process to do research. There are two groups of components on the Feature Selection page: main features and shared features.

This section introduces only the main components. For a description of the shared components, refer to SQL Server Books Online.

Reporting Services allows you to create and manage reports. This component of SQL Server is described in detail in Chapter 24.

Where Will the Root Directory Be Stored?

The root directory is where the Setup program stores all program files and those files that do not change as you use the SQL Server system. By default, the installation process stores all program files in the subdirectory Microsoft SQL Server, although you can change this setting during the installation process. Using the default name is recommended because it uniquely determines the version of the system.

Should Multiple Instances of the Database Engine Be Used?

With the Database Engine, you can install and use several different instances. An instance is a database server that does not share its system and user databases with other instances (servers) running on the same computer.

There are two instance types:

Although all instances running on a computer do not share most system resources (SQL Server and SQL Server Agent services, system and user databases, and registry keys), there are some components that are shared among them:

You should consider using multiple instances if both of the following are true:

instances of the Database Engine, because of limited resources. For this reason, you should consider the use of multiple instances only with multiprocessor computers.

Which Authentication Mode for the Database Engine Should Be Used?

Excerpted from Microsoft SQL Server 2012: A Beginner's Guide, Fifth Edition, by Dusan Petkovic (McGraw-Hill; 2012) with permission from McGraw-Hill. The full chapter is available for free download here. The book is available for purchase here.

In relation to the Database Engine, there are two different authentication modes:

Microsoft recommends the use of Windows mode.