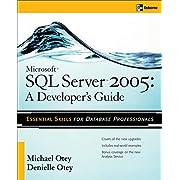 The following tips are from "Developing CLR database objects: 10 tips in 10 minutes," excerpted from Chapter 3 of the book "Microsoft SQL Server 2005: A Developer's Guide written by Michael Otey and Denielle Otey, courtesy of McGraw-Hill Publishing.

The integration of the .NET Framework's Common Language Runtime (CLR) with SQL Server 2005 is arguably the most significant new development featured in the SQL Server 2005 release. The integration of the CLR brings with it a whole host of new capabilities, including the capability to create database objects using any of the .NET-compatible languages, including C#, Visual Basic, and managed C++. In this chapter you'll learn about how Microsoft has implemented the new .NET CLR integration with SQL Server as well as see how to create CLR database objects.

The integration of the CLR with SQL Server extends the capability of SQL Server in several important ways. While T-SQL, the existing data access and manipulation language, is well suited for set-oriented data access operations, it also has limitations. Designed more than a decade ago, T-SQL is a procedural language, not an object-oriented language. The integration of the CLR with SQL Server 2005 brings with it the ability to create database objects using modern object-oriented languages like VB.NET and C#. While these languages do not have the same strong set-oriented nature as T-SQL, they do support complex logic, have better computation capabilities, provide access to external resources, facilitate code reuse, and have a first-class development environment that provides much more power than the old Query Analyzer.

The managed code accesses the database using ADO.NET in conjunction with the new SQL Server .NET Data Provider. A new SQL Server object called an assembly is the unit of deployment for .NET objects with the database. To create CLR database objects, you must first create a DLL using Visual Studio 2005. Then you import that DLL into SQL Server as an assembly. Finally, you link that assembly to a database object such as a stored procedure or a trigger. In the next section you'll get a more detailed look at how you actually use the new CLR features found in SQL Server 2005.