The following tip was excerpted from Chapter 1, 'Migrating from ADO to ADO.NET,' of the book Expert One-on-one Visual Basic 2005 Database Programming by Roger Jennings, courtesy of Wiley Publishers. Click here for the complete collection of book excerpts.

The DataSet object is unique to ADO.NET and typed DataSets are the preferred method for retrieving and updating relational tables, although DataSets aren't limited to processing relational data. You create typed DataSets, which are defined by an XML schema and implemented by a very large amount of auto-generated VB 2005 code, with VS 2005 designers. Untyped DataSets are runtime objects that you create with code. DataSets have no corresponding ADODB object, but both classes of DataSets behave similarly to disconnected Recordsets in the following ways:

Use the following table of contents to navigate to the most important differences between DataSets and disconnected Recordsets, then get methods for generating ADO.NET objects with VS 2005 and SQL Server 2000 or 2005.

Figure 1-5 compares the objects required by updatable ADODB Recordsets and ADO.NET 1.x and 2.0 typed DataSets. Components that are new in ADO.NET 2.0 are shaded. Parameters are optional for ADODB commands, but not for updatable TableAdapters, which have four standard commands— SelectCommand, InsertCommand, UpdateCommand, and DeleteCommand. Use of the new ADO.NET 2.0 BindingNavigator components is optional. The section "Add a DataGridView and DataNavigator Controls," later in this chapter, describes how the BindingSource fits into ADO.NET 2.0's data access architecture.

The following sections show you alternative methods for generating Figure 1-5's ADO.NET objects with VS 2005 and SQL Server 2000 or 2005.

Add a Typed DataSet from an SQL Server Data Source

ADO.NET uses the term data source as a synonym for a typed DataSet with a predefined, persistent database connection. The process of creating an ADO.NET data source is similar to using VB6's Data Environment Designer to specify an OLE DB data provider from one or more tables. Unlike the Data Environment Designer, multi-table DataSets don't have the hierarchical structure that the OLE DB Shape provider creates for display in VB6's Hierarchical FlexGrid control.

Here's how to add a new SQL Server Northwind data source for a new Windows form project and automatically generate a typed DataSet and its components from the Customers table:

2. On the Choose a Data Source Type page, accept the default Database type, and click Next to open the Choose Your Database Connection page, which displays existing data connections, if any, in a dropdown list.

4. Type localhost or .SQLEXPRESS in the Select or Enter a Server Name combo box. Alternatively, select a local or networked SQL Server or MSDE instance that has a Northwind or NorthwindCS database.

5. Accept the default Use Windows NT Integrated Security option, and open the Select or Enter a Database Name list and select Northwind. Click Test Connection to verify the SqlConnection object, as shown in Figure 1-6. 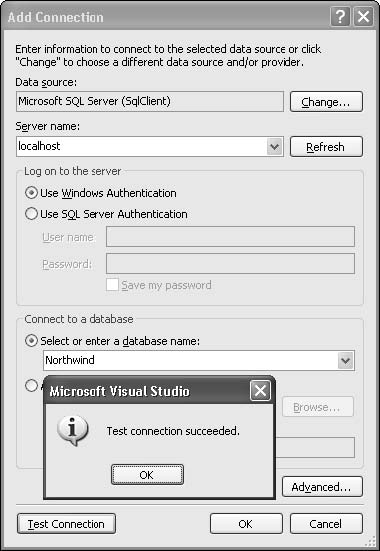 6. Click OK to close the dialog and return to the Choose Your Data Connection page, which displays ServerName.Northwind.dbo as the new connection name, System.Data.SqlClient as the Provider, and Data Source=localhost;Integrated Security=True;Database=Northwind as the Connection String.

8. Click Next to open the Choose Your Database Objects page, which displays treeview Tables, Views, Stored Procedures, and table-returning Functions. Expand the Tables node and mark the Customers table. Accept NorthwindDataSet as the DataSet Name, as shown in Figure 1-7. 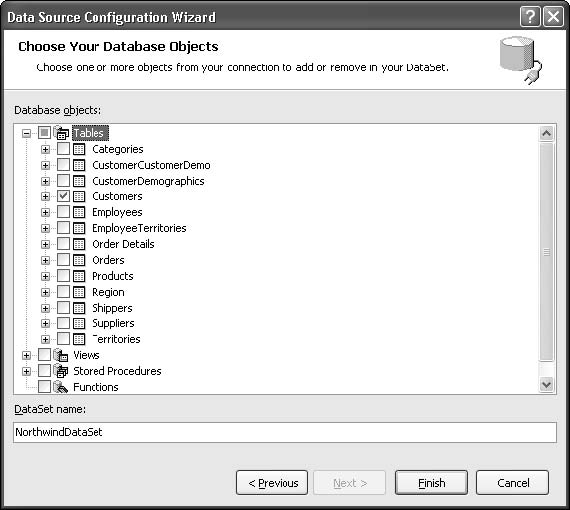 Selecting a table automatically generates the SelectCommand that retrieves all table rows, and an UpdateCommand, InsertCommand, and DeleteCommand for base table updates.

9. Click Finish to generate the NorthwindDataSet typed DataSet and display it in the Data Sources window. Expand the Customers node to display the Customers table's columns, as shown in 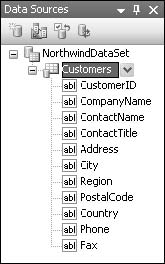 The new SqlConnection object you created in preceding Steps 3 through 5 appears under Server Explorer's DataConnections node as ServerName.Northwind.dbo. You can rename the node in Server Explorer to a simpler name, such as localhost.Northwind; doing this doesn't affect dependent objects in your project.

Double-click the NorthwindDataSet.xsd node in Project Explorer to display the Customers DataTable and its associated Customers TableAdapter, as shown in Figure 1-9, in the Schema Designer window. The VB 2005 code in DataSetName.Designer.vb provides IntelliSense for DataSet objects and lets you early-bind DataTable and DataSet objects. The code also provides direct access to named classes, methods, and events for the DataSet and its TableAdapter(s) -- Customers TableAdapter for this example -- in the NorthwindDataSet.Designer.vb code window's Classes and Methods lists.

If you've worked with typed DataSets in VS 2003, you'll notice that the schema for ADO 2.0 DataSets is much more verbose than the ADO 1.x version, which has only 30 lines that define the Customers DataSet. ADO.NET 2.0 prefixes the design-time schema with 258 lines of <xs:annotation> information, which provide a full definition of the DataSet and its connection string, commands and their parameters, and column mapping data. The part of the schema that defines the elements for the table fields grows from 30 to 94 lines because element definitions now contain maxLength attribute values and use restrictionBase attributes to specify XSD data types. 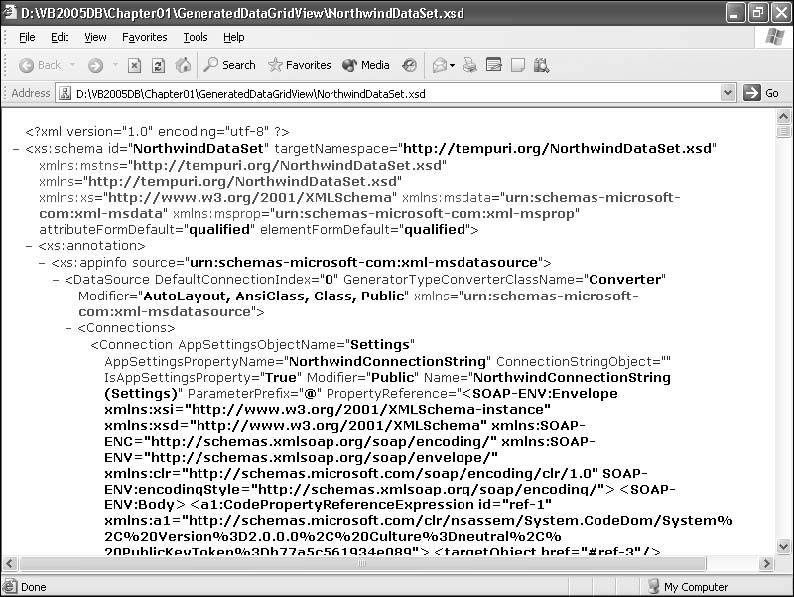 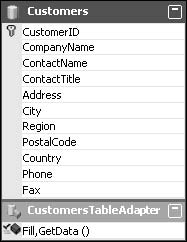 Using the DataSet.WriteXml and DataSet.WriteXmlSchema methods to persist DataSets to local files shows that the Customers DataSet schema, which differs greatly from the design-time version, is 9.31KB and the XML data document is 37.3KB. The section "Create a Complete Data Entry Form in One Step," later in this chapter, includes code to save the schema for the Northwind Customers DataSet. You can't open the saved schema in the project's Schema Designer.

Add a DataGridView and BindingNavigator Controls

Opening Form1 and the Data Sources window changes the appearance of the DataSource nodes. By default, the Customers DataTable icon now represents a DataGridView control. Dragging the Customers table node from the Data Sources window to your project's default Form1 autogenerates four components in the tray below the form designer and adds DataGridView and DataNavigator controls to a dramatically expanded form, as shown in Figure 1-11. 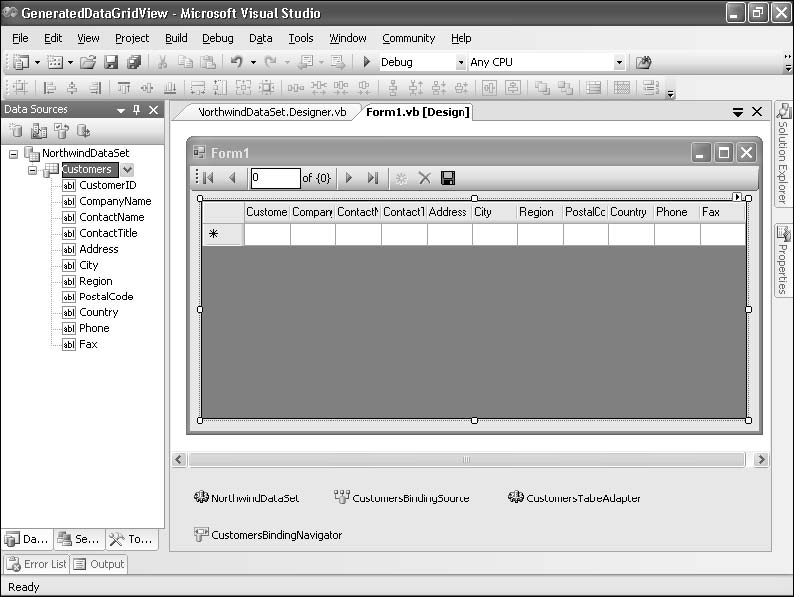 "Surfacing" is a common term for adding data and other components to the tray.

Here are descriptions of the four tray components shown in Figure 1-11:

The final step in the VS 2005 data form autogeneration process is adding the CustomersComponent .Fill method to the Form1_Load event handler, and code to save DataSet changes isn't added to the bindingNavigatorSaveItem_Click handler automatically, because of code complexity when the DataSet contains multiple DataTables. Saving multiple changes to parent and child tables requires sequencing inserts, updates, and deletions to maintain referential integrity.

Figure 1-12 shows the final form after reducing the form's size, expanding the DataGridView control to fill the available space, and pressing F5 to build, debug, and run the project. 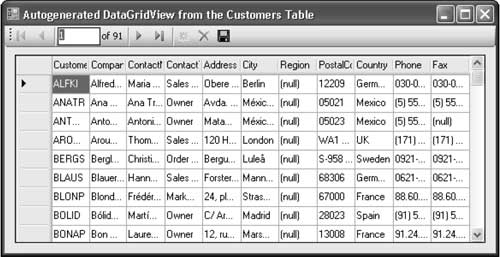 The CustomersDataGridView is bound to the Northwind Customers table, and editing is enabled by default. Changes you make to the DataGridView don't propagate to the table until you click the Save Data button. To make editing easier, you can automate increasing the column widths to match the content by setting the DataGridView's AutoSizeColumnsMode property value to AllCells or DisplayedCells, which adds a horizontal scrollbar to the control.

Persist and Reopen the DataSet

The project's frmDataGridView_Load event handler includes the following code to save the NorthwindDataSet's XML data document -- with and without an embedded schema -- and the schema only. You can add similar code after the last DataComponent.Fill or DataAdapter.Fill invocation of any data project to persist its DataSet.

Persisting the DataSet as an XML document without the embedded schema lets you support disconnected users by reloading the DataSet from the file. You can substitute the following statement for Me .CustomersTableAdapter.Fill(Me.NorthwindDataSet.Customers) when the user is disconnected:

The real-world scenario for persisting and reloading DataSets is more complex than that shown here. Later chapters describe how to save and reload pending DataSet changes that haven't been committed to the base tables. The XmlReadMode.Auto argument is the default, so including it is optional.

Change from a DataViewGrid to a Details Form

The default combination of DataViewGrid and DataNavigator controls speeds the creation of a usable form. However, a DataNavigator is much more useful for a details form that displays column values in text boxes or other bound controls, such as date pickers for DateTime and checkboxes for Boolean values. The Data Sources window makes it easy to change a DataGridView to a details form. Delete the DataGridView control, display the Data Sources window, open the dropdown list for the DataTable, and select Details, as shown in Figure 1-13. 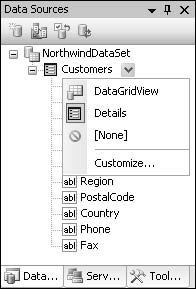 Drag the DataTable icon to the form to automatically add a column of labels with associated data-bound Controls -- text boxes for this example -- to the form. Figure 1-14, which is a modified version of the GeneratedDataGridView project, shows the labels and text boxes rearranged to reduce form height.

You can add a related table to the Data Sources window and then add a control, such as a DataGridView, that you bind to the related BindingAdapter. To add a related OrdersDataGridView control to a copy of the GeneratedDetailView.sln project, do the following:

1. Copy and paste the GeneratedDetailView folder, and rename the new folder OrdersDetailView. Don't rename the solution or project.

2. Press F5 to build and compile the project. Correct any object name errors that the debugger reports.

3. Open the Data Source window, and click the Configure DataSet with Wizard button to open the Choose Your Database Objects page.

4. Expand the Tables node, mark the Orders table checkbox, and click Finish, which adds in the Data Sources window a related Orders node to the Customers table and a standalone Orders node (see Figure 1-15). 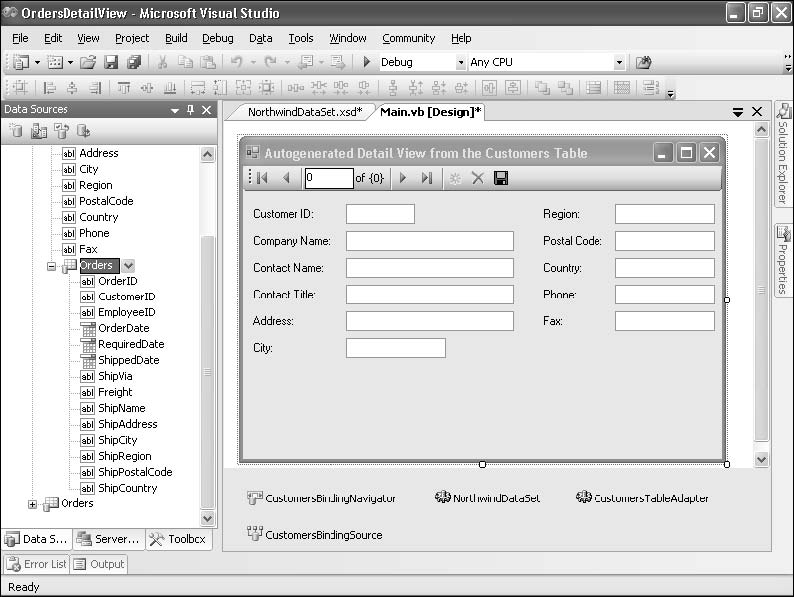 5. With DataGridView selected in the dropdown list, drag the related Orders node below the bound text boxes of the form to autogenerate an OrdersDataGridView control.

6. Adjust the size and location of the controls, and set the OrdersDataGridView .AutoSizeRowsMode property value to DisplayedCells. Optionally, alter the form's Text property to reflect the design change. 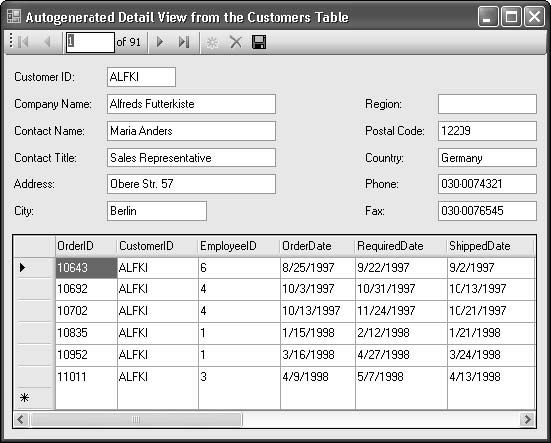 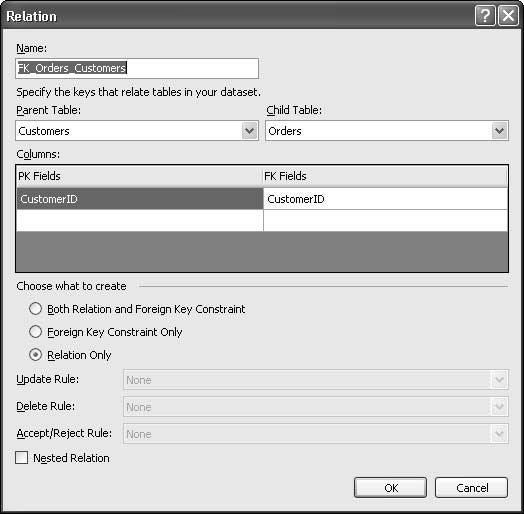 The above tip was excerpted from Chapter 1, 'Migrating from ADO to ADO.NET,' of the book Expert One-on-one Visual Basic 2005 Database Programming by Roger Jennings, courtesy of Wiley Publishers. Click here for the complete collection of book excerpts.